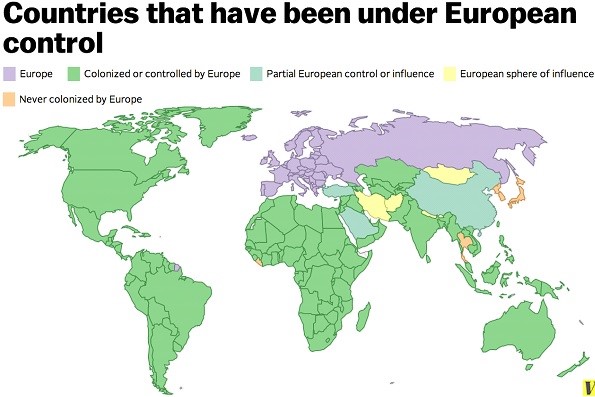 In the movie the Usual Suspects Verbal Kint (aka Keyser Söze) said that: “The greatest trick the Devil ever pulled was convincing the world he didn’t exist”, the same thing could be said about the British empire and western imperialism.

When Nancy Pelosi, speaker of the United States House of Representatives, decided to visit Taiwan, knowing that it would provoke China, this was not a brave stance for democracy, against the alleged tyranny of the Chinese government. A cursory glance through this website will convince any independent-minded reader that all major powers are tyrannies, no matter how many times they use the words democracy, and shared values, like a hypnotic mantra.

Her visit was in fact, a blatant aggressive move by America, the leader of NATO, and the western empires, to put China in its place.

We hear it all the time. They, usually a euphemism for Africa, Asia, and Russia, do not share our values. The foreign secretary, and maybe Britain’s next Prime Minister, Liz Truss said: “It’s about our shared values of democracy and freedom and how Taiwan has been an example to the world.” But, what are these values you have to ask? Truss hits out at China’s ‘inflammatory’ reaction to Pelosi’s Taiwan visit

Let me return to that profound quote in the beginning of this post. “The greatest trick the Devil ever pulled was convincing the world he didn’t exist.”

The greatest trick that the west has ever pulled was to convince the world that they ended colonialism. So, let us take a closer look at the values Truss talks about.

Are these the values that destroyed Iraq, so that western corporations could get control of the vast oil resources? The greatest spin story ever told: Obama’s Iraq withdrawal speech

Are these the values that destroyed Syria, and Libya, again…you guessed it! For the resources? The violence that Western Powers sow in Syria and the Middle East will be reaped on us

Or maybe it is the values that tore Sudan into two states, to again…come on, this isn’t a trick question! To divide the resources. How the West divided Sudan

I could cite example after example, but I think you get the point.

Theft, plunder, murder, and rape are the values that the west has built their empires on, and continues to maintain those empires. This is the context of Pelosi’s visit to Taiwan, to play that old strategy of divide and rule.

It’s quite poetic that I have chosen the Verbal Kint (aka Keyser Söze) quote, because the values of the west are in harmony with the values that we associate with the mythical devil. One cannot reconcile the history of the British, French, Spanish, Portuguese, or German empires, with the teachings of Yeshua (better known in western tradition as Jesus). Yet, millions of deluded Europeans actually believe that western civilisation was built on the values of Yeshua. I would like anyone to please demonstrate how this is the case? I am all ears.

The Modern Racist Connotations Of The White Man’s Burden

Do you remember not so long ago when Europeans believed that it was their mission to civilise the darker races? Well, if you do, compare the modern usage of language used today by western leaders. You will see that there are subtle, but effective racist terminologies used to describe the savages in today’s modern world.

They can no longer blatantly use racist language, so they hide it behind terms such as, our values, democratic ideals, our way of life, and freedom. When these terms are used you would be lying to yourself if you said that you associate them with African, or Asian cultures. These terms are the new euphemisms for the white man’s, and white woman’s burden.

Instead of the blatant divide and conquer strategy, we now have western figures such as Nancy Pelosi embarking on diplomatic trips to Taiwan, to apparently show solidarity with the shared values, freedom, and democracy.

Instead of a blatant war of aggression to steal resources, we now have humanitarian intervention, and the mission to protect the international community, another euphemism, which can be translated as, the western world’s sphere of dominance.

The greatest trick that the west has ever pulled was to convince the world that they ended colonialism.