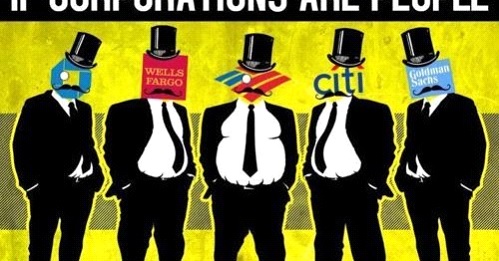 We have been taught that the Nazis committed the most evil crimes in human history however, corporations were exploiting African slaves and humanity long before the Nazis made their mark on history.

The Dutch East India Company and the English East India Company, are two examples of corporations in the 17th century that exploited African slavery, human labour, and and the natural resources of Africa and Asia for profit. A conservative estimate by the United Nations states that approximately 17 million Africans died from the transatlantic slave trade. Other sources put the figure as high as 60 million when taking into consideration the stagnant growth of Africa’s population during these times. Death Toll From The Slave Trade

In 2011, it was estimated that a billion people were hungry in the world because of the corruption in the global food system.

Corporations are buying up land in Africa to export crops to rich consumers in western countries. More than twenty million hectares of African land belong to foreigners, which is the equivalent of most of the UK farmland being owned by foreign governments or corporations. Corporate greed has led to the world food crises and starvation in Africa

The same corporations make billions of dollars, pounds and Euros funding conflicts in Africa while attending elite meetings organised by The World Economic Forum to discuss world peace and ending famine. Blood Money: These Companies and People Make Billions of Dollars from War

The same corporations had no problem experimenting on Africans as if they were animals. Ebola is a U.S. Biological weapon with Africans tested on as lab rats, says American professor, Coronavirus, Bio-Warfare & Cuba, Beware of Europeans bearing gifts: The global child immunisation programme

Perhaps the most ingenious disguise of all that corporations have thought up, is spreading their influence in Africa under the guise of charity. Considerable damage has been done to African people, and African economies, by charities and aid organisations, that is on a par with the weapons manufacturers and the transatlantic slave trade. The Deadly Aid Industry

This part of my article is for Europeans. Especially the proud, flag waving, patriotic Europeans, who believe that western civilisation was built for them.

The pursuit of greed by the few at the expense of the many has meant that those who have controlled the money and power for centuries have had to come up with a genius, but diabolical scheme by which to keep the common masses divided and distracted from their common aim. No greater instrument has been used to divide people than race.

Yet, corporations have had no problem butchering over 90 million Europeans over two world wars. They have profited from these deaths, and played an active role in perpetuating both conflicts. 27 Million Died in Russia Because Wall Street Built Up Hitler’s Wehrmacht to Knock Out Soviet Union

There are rare enlightened Europeans who see through the fog of the corporate controlled mainstream media, such as ex British soldier, Ben Griffin who said:

“Fight for Queen and Country, what does that mean? It is a jingoistic phrase dreamt up by some propaganda merchant intent on stoking the fire of that false religion patriotism. The idea of fighting for Queen and Country is held tight by those who never have and never will actually fight. It is held by those who long to bask in the reflected glory of war. It is held by those who have no experience of the suffering that war inflicts. It is an idea held up by those who gain the most from war, Politicians, Generals, The Arms Industry and The Media.”

Ex-British soldier Ben Griffin: Why we will not fight for Queen and country

“I spent 33 years and four months in active military service and during that period I spent most of my time as a high class muscle man for Big Business, for Wall Street and the bankers. In short, I was a racketeer, a gangster for capitalism. I helped make Mexico and especially Tampico safe for American oil interests in 1914. I helped make Haiti and Cuba a decent place for the National City Bank boys to collect revenues in. I helped in the raping of half a dozen Central American republics for the benefit of Wall Street. I helped purify Nicaragua for the International Banking House of Brown Brothers in 1902–1912. I brought light to the Dominican Republic for the American sugar interests in 1916. I helped make Honduras right for the American fruit companies in 1903. In China in 1927 I helped see to it that Standard Oil went on its way unmolested. Looking back on it, I might have given Al Capone a few hints. The best he could do was to operate his racket in three districts. I operated on three continents.”

Murder For Profit Or Global Genocide

If you have followed this website for some time you will have read my discussions around the Covid-19 pandemic. I have encouraged freedom of speech, which included exploring the comments from the scientific and medical community who questioned or challenged the mainstream media official narrative.

From the outset these many individuals have been censored, vilified and made outcasts by the corrupt, corporate science agenda, and the mainstream media. Corporate Science Is The New Inquisition, Why We Cannot Trust The Mainstream Media And The Political Class On The Covid Narrative

If what I share next does not make even the most hardened white nationalist reflect on their views, then perhaps a real people’s revolution will never happen in my lifetime.

When I read this article, I could not even get past the first paragraph without an emotional outburst. Such was the enormity of the crimes against humanity, of such serious monstrosities, that the crimes of the Nazis pale in comparison.

I’ve been silent for some weeks. Forgive me. The truth is: I’ve been rendered almost speechless — or the literary equivalent of that — because recently I’ve had the unenviable task of trying to announce to the world that indeed, a genocide — or what I’ve called, clumsily but urgently, a “baby die-off” — is underway. The WarRoom/DailyClout Pfizer Documents Research Volunteers, a group of 3000 highly credentialled doctors, RNs, biostatisticians, medical fraud investigators, lab clinicians and research scientists, have been turning out report after report, as you may know, to tell the world what is in the 55,000 internal Pfizer documents which the FDA had asked a court to keep under wraps for 75 years. By court order, these documents were forcibly disclosed. And our experts are serving humanity by reading through these documents and explaining them in lay terms. You can find all of the Volunteers’ reports on DailyClout.io. The lies revealed are stunning.

Read the full report for yourself if you can stomach it. It reveals criminal premeditation of crimes against humanity, pregnant women, children, and the reproductive organs of men and women, by Pfizer and the medical authorities.

The documents are free to read by the mainstream media, politicians and the medical professionals who bombarded us with apocalyptic statistics and doomsday scenarios. We were psychologically and emotionally ripped apart from our families, friends, and loved ones, based on the advice that we would be harming them and putting them in danger.

In a free society, with a free press, this report would be top news. What we are faced with is complete silence and criminal denial.

Think of all the most repulsive mass murderers in history that you know, and their crimes do not compare to the ones exposed in this report.

I skipped passed Dr Wolf’s religious conclusion towards the end of the article. No disrespect to her faith. I can understand why someone would want to believe in a God after reading this report, but I personally prefer to put my faith in the damning revelations that are revealed.

I can personally understand Dr Wolf wanting to so desperately believe in angels and demons after reading about evil of such magnitude, but I prefer to believe that awakening as many people as possible will one day lead to a real revolution. A revolution, that will result in the trial and public executions of all individuals, who have taken part in crimes against humanity, whether we want to call them demons, or psychopaths; or simply greedy bastards!

A revolution, so that generation after generation will never allow greed to be the currency by which humanity operates, ever again!

This report demonstrates that there is no black or white, male or female, jew or gentile, gay or straight, transgender, or no gender, in the eyes of corporations. We are fodder; beasts, to be prodded, poked and manipulated, and then turned against each other, like pit bull terriers in a fight to the death.

We are culled like beasts in the name of greed, or global genocide. You choose. We can no longer sit on the fence!