Apr 15, 2022 immigration, asylum seekers, refugees, British government has made a deal with the Rwandan government 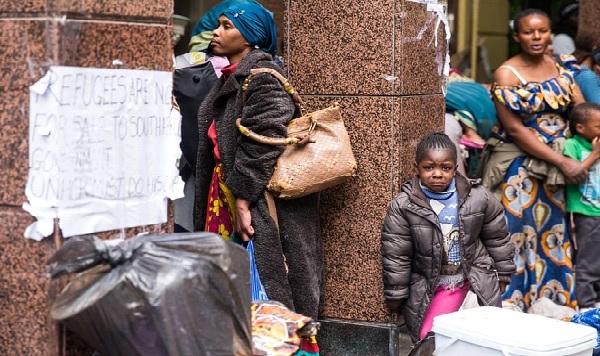 British foreign policy fuel conflict and war around the world which is why the victims of conflict come to the UK.

If you lived in a conflict-ridden country, and there was no end in sight; like many refugees around the world, you would seek shelter somewhere where there was no war. Who wants to raise their children in conflict zones?

So, when the immigration debate in Britain begins with the usual argument, that people come here for economic benefits, not only is this argument lazy, in the face of overwhelming evidence, it is downright racist.

It is certainly ironic that the current British government has made a deal with the Rwandan government to send asylum seekers over there to be processed.

The British government had no problem sending arms to Rwanda during the Rwandan genocide. Over one million Rwandans died, and western powers such as the UK are up to their necks in the blood of butchered Rwandans. (UK firms armed Hutu killers)

Back in 2010, I cited a quote from The Refugee Project, a coalition of refugee communities and organisations working to address the issues that UK foreign investment plays a role in forcing people to flee their countries.

“The vast majority of refugees today are fleeing conflict, or social or economic oppression – and the vast majority of the world’s refugees live in the countries of Asia and Africa; less than 2% make it to Britain. In many cases, the British government, companies and taxpayers are directly and indirectly supporting a multitude of human rights abuses that often go with British overseas investment and policies, some of which ultimately force people to flee their homes and then their countries .”

“These investments have not just been the more obvious ones, such as waging war or allowing the export of weapons. They also include supporting large infrastructure projects, such as hydro-electric and irrigation dams, oil and gas pipelines, and mines.” (http://www.therefugeeproject.org/Home.htm)

The Campaign Against Arms Trade (CATT) is a London-based organisation which aims to eradicate the international arms trade.

According to a CAAT report called, ‘Shelling Out: How taxpayers subsidies the arms trade’: “For decades the UK Government has had a policy of promoting arms exports, seemingly at any cost. The result of this policy is that the UK continues to arm repressive regimes around the world. In 2000, the UK licensed military exports to 30 of the 40 most repressive regimes in the world and British weapons are being used in most of the world’s current conflicts.”

The report states that £760 million of British taxpayers money is used to subsidise the arms industry.

I ask you, is it immigrants, refugees or asylum seekers draining the British economy, or have we all been duped again by our government and the corporate-controlled mainstream media?

Racism And Division As A Weapon Of Mass Distraction

Cancel culture and the mainstream media has pitted communities against each other.

The fear of the other, and scapegoating people is an undesirable trait of human nature, that can not be explained by race alone. I was disgusted to read that a Zimbabwean immigrant was killed by South African anti-immigrant protestors. (S. Africa: Calls for calm after vigilante group murders a Zimbabwean)

South Africa has a high unemployment rate and tensions between indigenous South Africans, and African immigrants have been growing for some time over the competition for jobs and resources. Does this remind you of anywhere?

War, and conflicts; causes huge population displacement, and disrupts the natural economic growth of nations. Is it a coincidence that the British government fuel these conflicts and wars? I don’t believe so.

If you feel that British culture and identity is under attack, then I suggest you tackle the roots of immigration which goes all the way to the top. I forget though, it is much easier picking on those who are weaker than ourselves, because that is how cowardly, bullies behave.

Instead; we should come together and bring an end to the enemies of humanity, who seek to destroy cultures, nations and economies, in the name of global economic control.

The Rise Of The Covid Class Wars