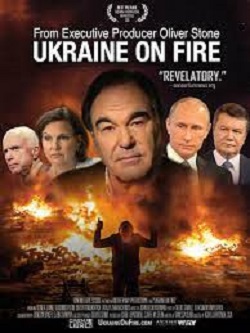 American online video sharing platform YouTube, has removed Oliver Stone’s documentary, Ukraine On Fire, for promoting Russian propaganda, but what this shows is that censorship in western countries is alive and well.

For those of you who are unfamiliar with the work of Oliver Stone, he is famous for producing socially critical films such as, Platoon (1986), Born On The Fourth Of July (1989), and Wall Street (1987) etc.

In a healthy democracy, freedom of speech is the cornerstone of maintaining the democratic process.

It doesn’t matter whether you have watched this documentary, and believe it be be Russian propaganda, or a fabulous piece of social commentary. What matters, is that everyone has the right to see it, and decide for themselves where they stand on the matter.

Technology, such as the Internet is supposed to have provided people with more freedom of choice and expression, but the evidence shows that information is being controlled and managed to influence public attitudes.

Chomsky explained that what we in the west take for free speech, is actually a carefully-crafted, media-managed narrative, which serve the interests of the financial elite, who own the media. In his view, individuals are only allowed to express what is permitted, and those who dare to break from the narrative are often ignored, vilified, and discredited.

The Covid-19 pandemic is an example of how dissenting voices are kept out of the mainstream media. (Read Why We Cannot Trust The Mainstream Media And The Political Class On The Covid Narrative: Minority Perspective: 14 June 2021).

Do you remember the post Brexit scandal involving Cambridge Analytica and Facebook? If you don’t, read the following article by James Ball, The real story of Cambridge Analytica and Brexit (The Spectator: 11 October 2020). The story reveals how our information, and our voting and buying patterns are being harvested by big tech companies to influence how, and what we think about.

Are You Being Brainwashed?

If you find yourself getting angry, emotional, and incoherent when defending a belief or idea, there is a chance that you could be brainwashed.

If you engage in debate with the sole purpose of defending a set of beliefs or ideas, there is a chance that you could be brainwashed. After all, a debate is a discussion with different points of view, if only one point is heard, it is not a discussion, nor a debate.

Let’s be honest, we’ve all been brainwashed at some point, and one way of deprogramming yourself is to have an open and healthy scepticism about everything that you are told.

Watch the documentary and make your own mind up. Ukraine On Fire: Russian Aggression or American Interference? You Decide.