The Love Of Money Is The Root Of All Wars 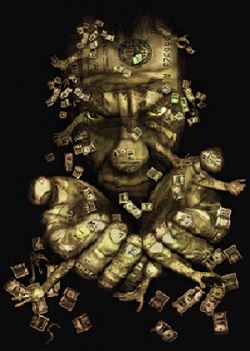 I do not want to bore you with history and facts about why Russia has gone to war with the Ukraine. I neither have the expertise, or the experience to provide a detailed background on why all of this is happening.

In fact, you can watch the BBC, CNN or ITV tell you of how Russian leader, Vladimir Putin, is a maniacal psychopath, hell bent on restoring the glory of the former USSR empire.

You can watch RT (Russia Today) or other media outlets explain how the United States, EU and Britain have provoked Russia into an inevitable conflict to defend its own borders and sovereignty.

You can watch all the news from both sides, and still feel confused to who started this, why, and for what purpose.

I published the following post in July 2016, Dissecting The Truth In A World Of Misinformation, where I said that a simple, inquisitive, child-like approach to understanding the world can uncover a multitude of truths.

Disturbing World War II Facts That Everyone Should Know

Did you know that Alvin Finkel and Clement Leibovitz in their book, The Chamberlain-Hitler Collusion, said that British Conservative leader Neville Chamberlain, colluded and encouraged the rise of the German Nazi, military machine, in the hope that it would destroy socialist Russia? (27 Million Died in Russia Because Wall Street Built Up Hitler’s Wehrmacht to Knock Out Soviet Union: 09/08/2017, by Jay Janson)

Did you now that many American corporations such as, General Motors, JP Morgan, Ford, and major Wall Street investments firms such as, the Morgan-Rockefeller international investment bankers, were deeply involved in the financing, supplying and construction of the German Nazi military machine? (World ‘Leaders’ at Auschwitz Anniversary Skip Wall St. Arming & Empowering Anti-Semitic Hitler: 25/01/2020, by Jay Janson)

They say that we must never forget, but it seems that many facts have been conveniently forgotten about how greed has led to many wars and conflicts.

The Rising Bloodshed Leads To A Rise In Profits

You do not have to look far to see that the same bloodthirsty enemies of humanity and peace are still at work today, collecting profit from war, famine and poverty.

Sarah Lazare, web editor and report for In These Times, said:

“As the United States weighs more involvement in the growing conflict between Ukraine and Russia, some of the largest weapons companies in the world — Raytheon and Lockheed Martin — are openly telling their investors that tensions between the countries are good for business. And General Dynamics, meanwhile, is boasting about the past returns the company has seen as a result of such disputes.” (Top Weapons Companies Boast Ukraine-Russia Tensions Are a Boon for Business 27/01/2022.)

I wonder if the Ukraine and Russian people read these publications?

This Is Money.co.uk encourages investors not to panic, saying that “‘Oil and energy stocks will benefit from the global surge in crude and gas prices, while banks will be beneficiaries of rising global interest rates“. (War erupting in Ukraine devastates the world and upends markets: Investing experts warn ‘don’t panic’, so what is the best strategy in the crisis? By Tanya Jefferies, 25/02/2022.)

Wall Street, never one to miss out on a good chance to make profit from human deaths, are hoping for a long war. Saying, “Because Russia is a big producer of oil and, specifically, supplies a huge amount of oil to Europe, the thinking is that America’s NATO allies will become far more reliant on US oil, increasing its value. Germany has already frozen the Nord 2 gas pipeline from Russia.” (Vice.com: WallStreetsBets Discussing How to Profit From Ukraine: ‘Tendies’ for US Oil Stocks, by Jason Koebler, 23/02/2022)

Do the above examples sound like countries are defending democracy and promoting peace to you?

The next time you watch the BBC, CNN, ITV or RT, consider the following question; who is benefiting from the conflict?