The Corporate Commodification of the Black Civil Rights Movement 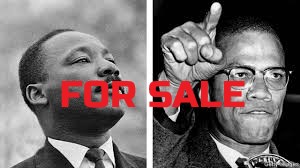 Nike, Lucasfilm, Apple and Lego are just a few of the many companies lending their support to the Black Lives Matter protests all over the world following the death of 46 year-old George Floyd however, the founding pioneers of the civil rights movement would be mortified to see the black civil rights movement being used to promote Western corporations for profit.

If you listen to the Nike youtube video above in support of Black Lives Matter I am sure that many of you were moved that such a big corporation has taken a stance on such a huge social issue on racial injustice.

When you actually examine the potential reasons to why Nike and other corporations are joining the protests you cannot help but be cynical.

In fact a Financial Times story by Tom Braithwaite (5th Junes, 2020), states that Nike stock rose by nearly 30% back in 2018 when they supported NFL quarterback Colin Kaepernick for kneeling during the national anthem in protest against police violence towards Black people. Whilst Braithwaite writes the article with a suggestion that corporations are genuinely reacting to social changes it is hard not to see that the rising stocks share played a role in Nike’s decision. (Read How companies decided that black lives matter) Please note that if you paste corporations support black lives matter into the search engine you should be able to read this article without subscribing.

It may come as surprise to some readers to know that Nike was voted the most admired sports brand in Africa for the third year in a row. What this shows is that Black people are playing a crucial role in Nike’s sales and profits. It could be argued that Nike is merely reflecting the views of their growing consumer demographics. (Read Nike voted most admired brand on the continent​)

Nike’s supposed racial moral ethics stands in contrast to their actual operations overseas where Asian workers work long hours for low wages. (Read Nike Called Out for Low Wages in Asia Amid Colin Kaepernick Ad Promotion), yet Black people are supposed to believe that Nike supports Black Lives Matter out of social conscience? I’m not buying it, forgive the pun.

Star Wars actor, John Boyega gave a rousing speech  in London’s Hyde Park on 3 June, stating that his career may be ruined because he has decided to speak out.

In a rallying cry he said:

The Vogue title refers to it as an ‘era-Defining speech’. Lucasfilm gave a statement in support of Boyega saying:

The evil that is racism must stop. We will commit to being part of the change that is long overdue in the world.

John Boyega, you are our hero” (Read LUCASFILM STANDS WITH JOHN BOYEGA)

What if Boyega’s speech had included names such as Gul Mudin, the teenage Afghan boy murdered by American soldiers stationed near Kandahar in 2010; who then attempted to cover-up their crimes? (Read The monstrous atrocities of U.S. soldiers in Afghanistan)

What if his speech had included the fact that British arms sales supplied both sides in the war over the Democratic Republic of Congo which has led to millions of Black deaths facilitated by the British government? Would Lucasfilm support him? (Read Amnesty International report exposes the corrupt arms trade of major UN powers)

If the Black Lives Matter movement incorporated the millions of Black Lives lost to Western wars for greed, power and resources would all these corporate companies be jumping on the bandwagon? I do not believe that they would at all.

Karen Ferguson is an associate professor of history and urban studies at Simon Fraser University and author of Top Down: The Ford Foundation, Black Power, and the Reinvention of Racial Liberalism and Black Politics in New Deal Atlanta.

This is not the dream that Martin Luther King had in mind.

https://www.ft.com/content/6bd46c48-ee90-42b8-af70-78d949025c1d Please note that if you paste corporations support black lives matter into the search engine you should be able to read this article without subscribing.