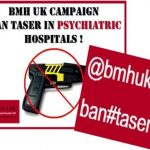 Human rights campaigns group  Black Mental Health UK (BMH UK) has launched a National Taser survey for black Britain, which has been circulated to over 100 black led and run agencies around the country that support or work with people from the UKs African Caribbean communities.

Launched as the Home Secretary has authorised new more powerful Taser gun for police forces in England and Wales, this  community based survey aims to capture the views of black people of African descent, particularly the most vulnerable groups such as those who use mental health services and young people, as they represent the sections of this community are most likely to be subject to this firearm.

Black people of African descent are among the most over policed and underprotected communities in Britain, and are three  more likely to be Tasered by the police than their white counterparts. Data shows that in London alone a staggering 50% of those subject to this firearm are from this community.

One in three of those subject to this stun gun are known to have a mental health condition.  For the past two years BMH UK has led a campaign to ban the use of these firearms against vulnerable patients who are detained on locked psychiatric hospitals.

BMH UK is conducting this national survey on Taser as we believe that it is important to canvass the views of Britain’s black African Caribbean communities on this issue.

Matilda MacAttram, director of Black Mental Health UK said: ‘It is disturbing to note that  in 2017 Black Britain continues to be over policed and under protected  and that people from this community account for some of the largest numbers of  people who are subject to Taser firearms.

Black people of African descent will be the group most affected by the Home Secretary’s decision to authorise the new more powerful Taser Gun, and we view this as a retrograde step that will increase disaffection of the police among Britain’s black communities.

BMH UK’s National Taser survey give the opportunity for people from the UK’s African Caribbean Communities to give their views on this weapon, and this will be used to inform our work in this area.’

This survey is running up until Friday 28th April 2017, click here to take part add your views to BMH UK’s National Taser Survey.